Arseni Khamzin is a photographer currently based in Montreal, Canada. He graduated with an MFA in Photography from the Hartford Art School in 2015 and a BFA from Emily Carr University in Vancouver in 2011. JMZ, Khamzin’s first monograph, is a soft cover title filled with saturated still lifes and urban forms uncovered in the streets of Brooklyn, New York.

“JMZ began in 2013 after I moved to Brooklyn from my hometown of Vancouver, Canada. For the project, I spent a year and a half taking long walks through the streets of my neighborhood in inner-city Brooklyn and photographing the objects, spaces, and people I encountered along the way. I used photography to try to understand the unfamiliar landscape that I found myself a part of and wished to create a project that would express the sense of awe, wonder, and confusion that I experienced in this landscape.” – Arseni Khamzin 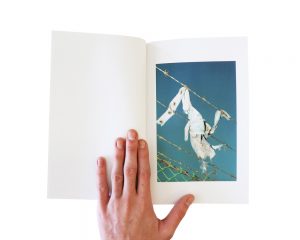 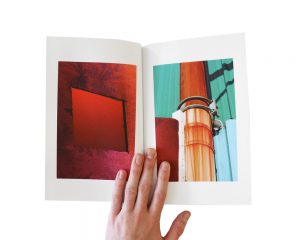 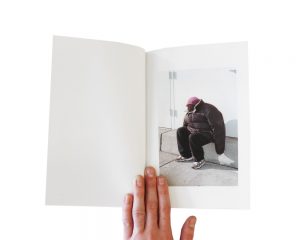 Do you feel as though the act of photographing helped you integrate yourself into your new surroundings?

When I went out to photograph, I was usually in a focused state of mind where I was looking closely and deliberately at things around me while being open to whatever I encountered. It helped me to be more present in my new surroundings in a pretty specific way, and I think this was tied to helping me integrate myself into a new place.

What motivated you during this experience of documentation? Were you seeking out specific subject matter when photographing or did you leave it more to chance?

I was trying to look really closely at what was around me and to see what I would learn from this experience.

Initially, I didn’t seek anything specific out and I was more interested in acquiring a general sense of what the landscape around me was and how it looked. I followed my eyes a lot and developed a sense of how my camera saw, which over time shaped the images I created. I became drawn to certain things that re-appeared in the landscape, which I found were like small riddles. I made multiples of subjects, like objects I found got caught in razor wire, or the different ways tapes and epoxies were used to patch walls. I formed groupings which I studied, but I also made many images where I was just reacting to a moment, or responding to the way the light was hitting a form. I think the latter images have a different quality that feels more genuine to my experience, or less methodical. I think chance is really important in photography and that it’s difficult not to react when something strange and incredible happens around you.

Did you ever discover something on your walks that surprising?

I think vacant lots were interesting places, because you could find all these plastics and refined manufacturing materials twisted and bent and torqued and stressed in all sorts of ways by their environments to resemble really strange, alien forms. There was lots of sludge in different forms and colors, oil sheens pooling out of driveways or sewage stagnating along canal shores. Or sun faded signs that had been worn down over seasons of snow and sun and ice and smog. I found a lot of urban New York to be quite surprising and strange and beautiful.

It’s hard to pin down a most interesting subject, but there’s an image that I keep coming back to of man sheltering from the cold in a thick down coat and running shoes, hunched over into himself with a tuft of hair sticking out of his coat. For me the photo is more interesting and enigmatic than the actual moment, and it feels strange and surreal and problematic all at once. I think it creates a reaction in everyone I show it to, and I think I keep coming back to it because my own reaction to it changes when I revisit it from time to time. 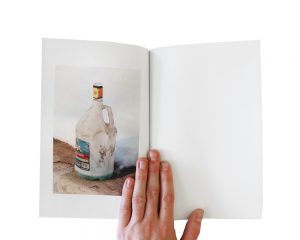 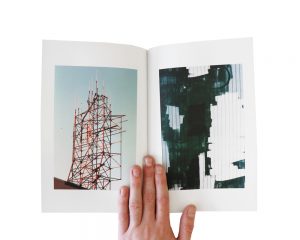 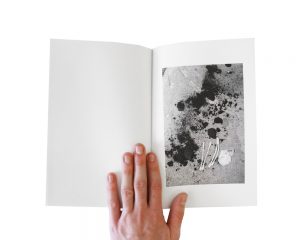 What did you learn about yourself or your surroundings through this process?

I thought a lot about cities and urban spaces, and how their complexity can manifest visually. Something I felt strongly was that it was like I was looking at a lot of different materials from varying time periods that had been thrown together to create the physical landscape of Brooklyn. Not as simple as saying that just brick or concrete or steel is what makes a city a city, but that the entropy of many different things over time come together to create a complex history. When I look at Brooklyn, I see innovations like industrial plastics and newer synthetic materials and processed food everywhere – spreading into the landscape, twisting into waterways, and being used to hold together older materials. In particular in areas that are decaying, the scope of surfaces and substances that I encountered was even more varied, and more visually striking, like the texture of modern decay is brighter, shinier, faster and cheaper – and that it’s reflected so many places, especially in urban America, in a really weird and complicated way.

I also learned that it’s really difficult to communicate an idea like that with images; that it’s easy to be too close to your own photographs, and to think of them as being able to say or show more than they actually do. There’s a balance that needs to be found with having photographs that try to tell viewers something and photographs that leave them curious and a bit confused, immersed in just looking at the pictures.

Did you always imagine this project to exist as a book?

Yes. I started to experiment with this form early on in the project, digitally and with physical book dummies. With most projects I make, I usually work with a lot of 4×6” prints and two copies of each image. I arrange one set on a wall or board and I use the other set to insert into books that I make myself with paper and tape, and to get a sense for how the images feel in the book format.

At the time, I was also in a book-heavy photography program, so there was a strong focus on the relationship and history that photo books have had in shaping the way photography is communicated, and in how I could push my work to exist in the book form in a compelling and challenging way.

The size and chosen materials for JMZ feel similar to a paperback journal or a diary – was this an intentional design decision?

During the project, the book’s appearance changed drastically. At one point it was sixty images, with gatefolds, foldouts, and other physical sequencing features. As the project changed and grew, the number of images shrunk and with that so did the size of the book the number of pages. When I was printing the final version, I had to figure out how to make the book look and feel right. One of those ways involved doubling up the pages and thickness of the book through french-folds, instead of single pages. Since I had to use a perfect binding to support this format, it also meant that I would likely be working with a soft-cover design to help the book open flatter. Many design decisions depended on the options and limitations that were available to me when I produced the final version, and to what felt best and truest to the work as I understood it.

What’s next for you?

I am planning a couple of exhibitions (one a group show at the Camera Club of NY in June) and have also been making a lot more work in my studio, but it’s still too early to tell what comes next with that. : )

To see more of Khamzin’s work or to purchase your own copy JMZ, please visit his website.