Celestial Bodies is a vibrant 60 page photo book self published by collaborators Eleanor Hardwick, Rachel Hardwick and Chrissie White. Together, these three young photographers traveled across eight of America’s western states to document their experiences in the landscapes they uncovered, with the motivation to investigate the female body’s relationship to its natural surroundings. Each book in its first limited edition of 100 copies features a foiled cover, a handmade acetate insert, and accompanied text written and hand painted by Eleanor. The book is designed by Jamie Shaw.

When was this project first conceived and what drew you to creating this body of work?

We have known each other through the internet for years, and there is a real synergy between all of our creative ideas as well as our own philosophies. We were all dreaming of escaping the city to reconnect with nature, and perhaps it was late 2014 that we decided we would adventure some of the USA’s Western national parks. The West made sense not only because Chrissie is based in Seattle, but because its landscapes are so varied.

We knew we wanted to make a body of work that explored escaping the pace and uncertainty of modern living, and reconnecting with the earth – because that is what drove us to travel in the first place. Chrissie and our other travel-mate, Elvia, had a loose idea that we should make a travel book – however when we looked back on the work after travelling, it ended up dictating to us that a much more subjective, fine art approach would be more sensitive to the work. (Note: Elvia ended up not being involved with the book itself in the end, but we owe a lot to her as a good friend and fellow creator who played a huge role in making this book so magical). 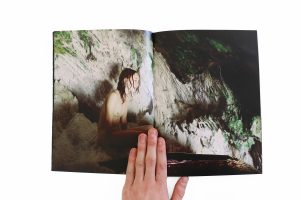 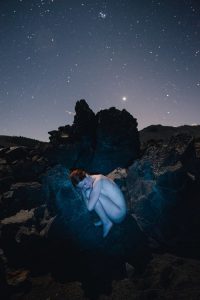 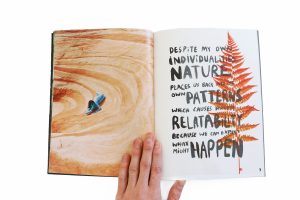 We all played very equal roles in the work: art directing, actually pressing the shutter, lighting, performing and editing. Every image has all of our fingerprints on in some way, so even if a few of the images in the book feel like they lean more towards one specific person, the series as a whole belongs to all of us.

When making each photograph, was there a specific concept you were trying to convey about the female form and our relationship to the natural landscape?

We wanted to explore the eternal connection that we as human beings have to this earth – in a time where the pace of our manmade world is so fast – and on the brink of its own collapse because of this. We were thinking about our body’s connections to phases of the moon, and to the earth, and the comforting reliability of the these patterns in nature.

Subsequently, the photos became an otherworldly and timeless representation of how beautiful our earth is, and how dependent we are on our connection to it. Without society constructed by man, we still have nature to rely on. Without nature however, we have nothing. Nature is what supports us as a species.

There are many instances in which the female body or surrounding environment seem alien or otherworldly. Was this a driving motivation behind the work?

We had all been dreaming of having vast open empty landscape to use as a canvas. It is creatively refreshing to not feel as if every building in sight was designed by an architect, and every object you see was someone else’s creative decision. An open landscape represents the beginning of a planet, untainted by any subjective decisions, and this definitely adds to the otherworldliness of nature.

Also, by placing the nude body in such timeless landscapes, we wanted to take the female form out of any modern context, whether that be the hyper-sexualisation that comes with female nudity in the media, or the fast pace of trends that come from contemporary fashion photography. 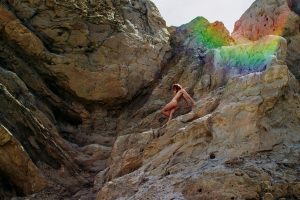 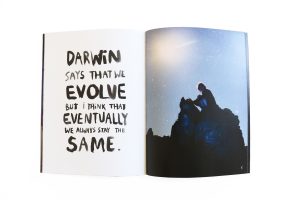 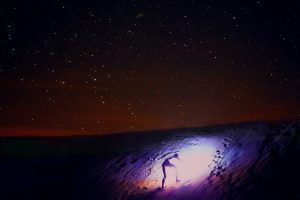 What did you take from this creative experience? Was it meditative or introspective for each of you?

Everyone could benefit from some time away from the internet and the city. It’s undeniably revitalising and puts things into perspective. And when we all returned to the city and developed the work into the book after the trip, we each felt more inspired by it again – the balance in us all felt more restored. However we are all desperate to get out and travel again!

Did you always imagine this body of work to be collected into book form? Were there specific design choices you made when piecing it together?

We knew before we set off that we wanted to make a book, however we let the process unfolded very naturally, and worked our more clearly afterwards what themes we had subconsciously explored. We made so much work on this trip – some was diary work that was published on Rookie Magazine & Indie Magazine – whilst these images were very much composed specifically for the purpose of wanting to create a book, and the timelessness and weight of them meant that a book was the perfect medium for that work to be published in.

One really magical part of the book’s design, that grounds a lot of the ideas that the three of us perhaps weren’t sure how to tie together, was Jamie’s decision to arrange the images into a narrative that reflects a moon’s phase. The page numbers of the book coincide with this, and the reader can see the moon literally wax and wane as they flip through.

Although the first edition of Celestial Bodies has sold out, visit their website to keep an eye out for future copies! 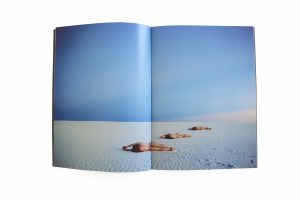 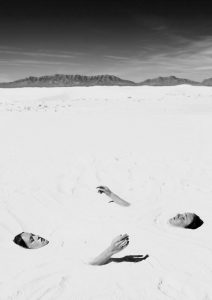 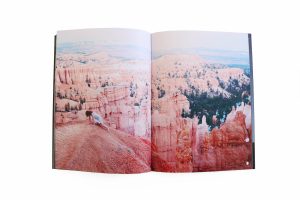 Eleanor Hardwick is a photographer and multidisciplinary artist born in Oxford in 1993 and currently based in London. Her photographs have been exhibited in London, Paris, Tokyo, LA, Oxford, Lisbon and Brighton, at galleries including Palais De Tokyo, The Southbank Centre and The Cob Gallery, and she has been interviewed by Dazed & Confused, BBC Radio 4, British Vogue, The Guardian, The British Journal Of Photography and The Independent about her work.

Chrissie White is a traveling photographer from Seattle currently looking for the magic that hides itself away in the obvious. When she’s not photographing strange characters in the studio, she’s traversing through mountains with a camera in hand trying to make art in nature.