Ariel Jackson is a multimedia artist from New Orleans and currently based in Brooklyn, NY. She received her BFA from Cooper Union for the Advancement of Science and Art in 2013.

Jackson’s hometown and her upbringing plays a crucial role in her art practice. Works by Jackson tell the stories of an insider bearing witness to racial and class discrimination in America. 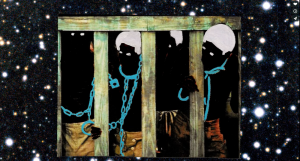 Using mediums such as video, animation, sculpture, and screen printing, she contextualizes her experiences as A New Orleanian affected by Hurricane Katrina, and as an individual experiencing her family’s history from the periphery of lost memories and obscured documentation.

Upon learning of her family’s unexplained loss of 300 acres of farmland in the mid 1900’s, Jackson has dedicated much of her practice to exploring and deconstructing her personal relationship to the problematic racial history of sharecropping and land ownership. Jackson’s use of self-referential mythology and references to science fiction and pop media aesthetics, present an alternative narrative of tragedy and violence through the lens of the black experience. In turn, the work highlights the overlooked poetics and healing potential of understanding and reclaiming trauma imbedded in a collective memory.